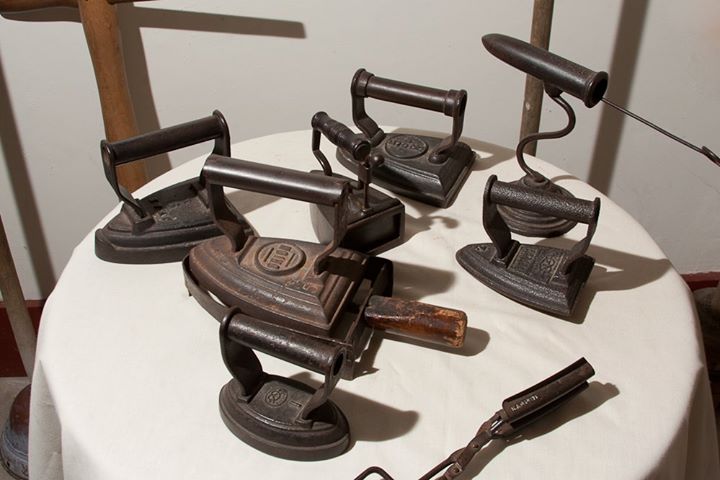 Object of the week, chosen by Kirsty, a volunteer:

I imagine that many of us in lockdown haven’t been doing one of the most hated domestic tasks – ironing! Except for those pesky zoom or skype chats and meetings! But as we get back out, whether to work or the shops, we will want to look a little smarter than you need to while at home. I don’t know about you, but I find summer clothes need more ironing than winter ones. I like nice loose linen and cotton in the summer – and you only have to look at linen for it to crease…

The museum has a wide selection of irons. People in Regency and Victorian times couldn’t just tug on a t-shirt and be ready for the day, and they didn’t have electric steam irons to help them. But my goodness, they had plenty of irons! If Monday was wash day, then Tuesday would be ironing day. Bed linens, tablecloths, towels, underwear, dresses, shirts – you name it, you ironed it!

Here you can see a number of different types and sizes of iron. Why different sizes? So you could use a large iron to tackle big, flat things like sheets, and a small iron could be used to get the right width for a sleeve, or a collar. There were different types of iron, too. You can see here that most of these irons are flat irons. You didn’t need to plug them in – you put them by the fire to heat up. Of course, that meant the whole iron heated up – the handle would be very hot, too, and you had to wrap a thick cloth around it. You can see the iron in the middle is different – it’s a box iron. It has a cooler wooden handle, making it easier to hold, and the heat is provided by a ‘slug’ of a heat-retaining material. One of the irons has a stand, to protect the surface on which you’re ironing.

Irons are called irons because they are made of iron, which holds the heat well – but even the smallest of the irons was pretty heavy. It was hard, hot work. You had to have two irons (or slugs) on the go, so that there was a hot iron ready as the one you were using cooled. Too cool – it wouldn’t iron. Too hot? There’s a lovely iron-shaped scorch on your sheet! If you were a servant, you’d definitely get in trouble for that, so you had to learn to tell how hot your iron was. How? By spitting on it to see if it sizzled – or, more dangerously, by holding it close to your cheek to assess the temperature. And it was hot work – ironing would have been done in the basement in Holst’s house, but in a heatwave it would have been pretty boiling!

What are the other appliances on the table? They’re irons, too. The rocket-shaped one at the back is a goffering iron. It was used to create ruffles and flounces without getting hard creases in them. The tube was heated by a poker-like piece of metal inserted into it, and then frilled cuffs and collars could be rolled around it, and ribbons moved across it. And the device at the front? They are similar, but maybe a little more flexible to use for small items as they’re not fixed by moveable – think of them as being very similar to hair curling tongs!

Phew! Just writing about it makes me want to go and sit in the garden with a long cool glass of something. But – wait – isn’t that a pile of ironing to do? Oh well! Some things never change!