Home > What’s on > Discover Holst > Object of the Week 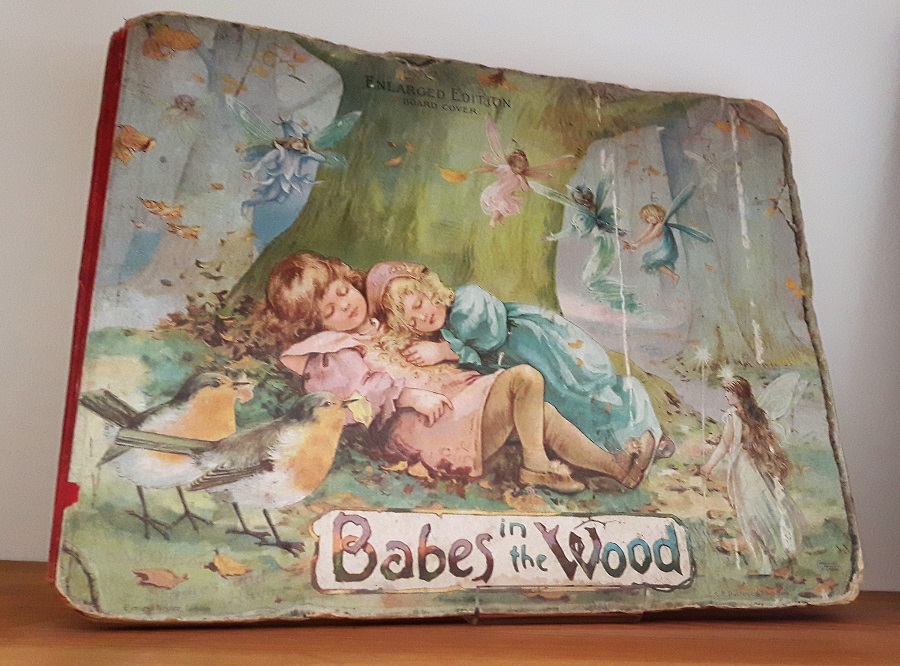 The latest Object of the Week has been chosen by Kirsty, a volunteer.

Have you ever noticed how dark children’s fairy tales can be? This sweetly illustrated children’s picture book from 1896 tells what was once a very dark story – Babes in the Wood, a story you may well know from pantomimes. In the panto version, the abandoned babes are often rescued by Robin Hood and looked after in the merry men’s encampment until their wicked uncle is caught – and all can live happily ever after. Sadly, though, in the original 16th century broadside ballad, the children don’t survive. It’s a nasty story of how the wicked uncle stands to inherit the children’s wealth if they die before they come of age. He has them abandoned in a wood – possibly Wayland Wood in the Norfolk Breckland. They eventually die, and the robins, in pity, cover the with leaves. The uncle then suffers bad luck, and himself dies in a debtor’s prison. How this became a popular tale, I do not know!

But in this children’s book from 1896 the children do not die but rather live forever in Fairyland ‘where none of the sweeties make anyone ill’ and ‘the Moon led the night in a dance of delight’! It is an enchanting book, beautifully illustrated with fairies and mermaids – and robins, of course, the children’s guides through Fairyland. The illustrator was Evelyn Stuart Hardy, a Bristol-born illustrator. She was extremely prolific, and produced a lot of books for E. Nister, the publisher of Babes in the Wood, including early pop-up books. There’s a version of this tale called Peeps into Fairyland that I wish the museum had – the same fairies and babes, but a pop-up version! Stuart Hardy was also a children’s author in her own right.

The author of Babes in the Wood is rather more famous – E. (Edith) Nesbit is very well known for her stories for older children – I grew up on The Railway Children, Five Children and It and The Wouldbegoods – but she wrote many books and poems like this for younger ones. It’s possible that she and Holst knew each other – like Holst, Nesbit was a socialist. She was one of the founders of the Fabian Society – a less revolutionary form of socialism than Morris’s Hammersmith Socialists, whose meetings Holst attended while living in London. Other early members included playwright George Bernard Shaw (another Hammersmith habitué whom Holst knew), novelist H G Wells and feminist Emmeline Pankhurst. Nesbit published adult novels under the pen name Fabian Bland (Bland being her married name).

Stuart Hardy and Nesbit’s Fairyland looks a charming place – but I am also reminded of how, in folk tales, the fairies come to steal human children away from ‘the big world’ of Nesbit’s poem – so we find ourselves back in the dark world of children’s stories. Why do we like them so much? Perhaps, even as adults, we all long for a world of enchantment, where no matter how dark things seem everyone still lives happily ever after.