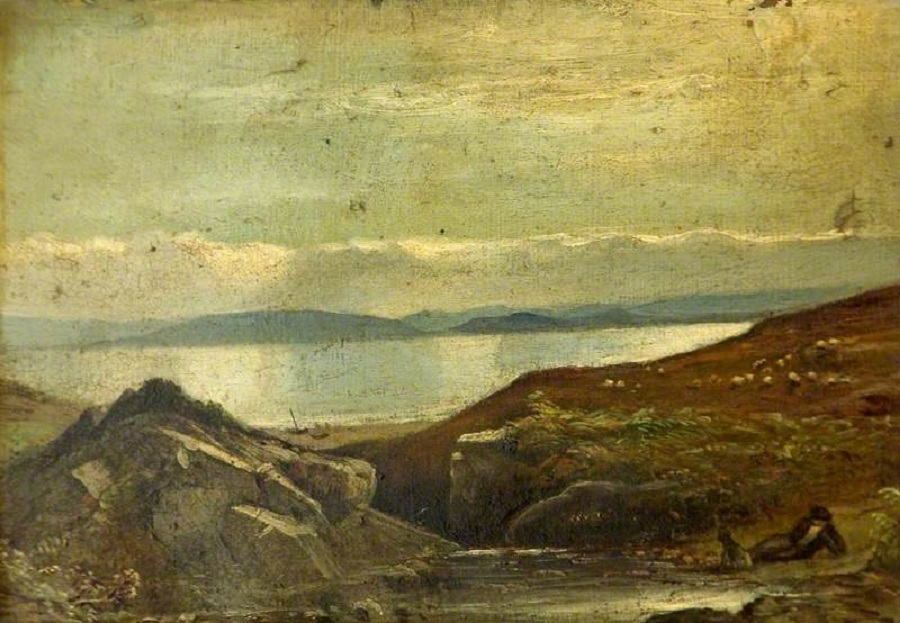 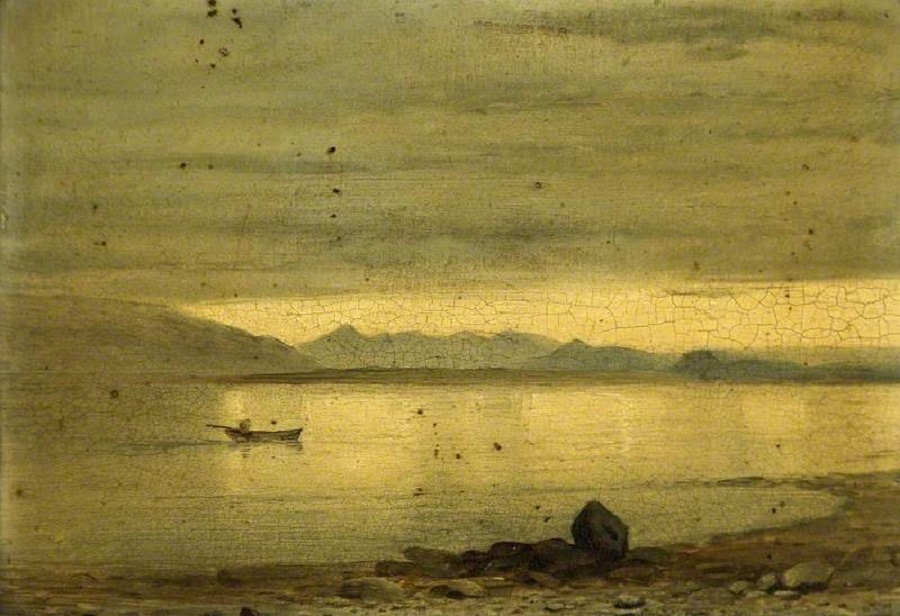 In the Housekeeper’s Room in the Museum are two small oil sketches showing views of the Scottish Highlands. Perhaps the Housekeeper, like Boris Johnson, longed for a Scottish getaway! Both paintings are entitled ‘Highland Scene’, the one showing a shepherd and his dog watching their flock high above a loch, and the other a small boat on another tranquil loch. The sketches are by John MacWhirter (1839-1911), a popular Scottish landscape artist. He was born in Edinburgh, and studied at the Trustees Academy. He exhibited his first painting at the Royal Scottish Academy aged only 17, and would continue to exhibit with them throughout his life, becoming an Associate in 1872.

The paintings in the Housekeeper’s room are dated 1857, so, if they are definitely that early, date from this very early period of his career. MacWhirter moved to London in 1869, and his Scottish subjects continued to be popular. In the mid-19th century there was a lot of enthusiasm for Scottish subjects, driven, in part, by Queen Victoria’s own enthusiasm. She visited Scotland for the first time in 1842, and soon purchased the Balmoral estate. But she, like many at that time, would already have been familiar with a legendary Scotland from the writings of James MacPherson, whose Ossian poems were still thought to be authentic medieval verses when the Queen was a girl, and, of course Walter Scott’s novels and poems. This romantic idealised view of Scotland, and particularly the Highland, was rather at variance with the situation for the people who lived there. The Highland Clearances were happening from the 1850s, and changed the face of the Highlands forever. The shepherd in the picture shows what was happening – vast acres were being converted to grazing for sheep, and the people who lived moved off the land. Many ended up emigrating to America and Canada.

This is not what MacWhirter depicts in his paintings. They tap into the romantic idea of Scotland, and capitalise on the beauty of the Highland landscape. At first, he was influenced by the Pre-Raphaelites, and the art critic and teacher John Ruskin even singled out a couple of his flower studies for particular praise, and gave them to the Ruskin School of Drawing (they’re now in the Ashmolean in Oxford). Later, his style became freer – more like, perhaps, these early sketches. He frequently travelled abroad to paint, loving Italy almost as much as Scotland, but saying, ‘if Italy is the land of light, Scotland is certainly the land of colour’.