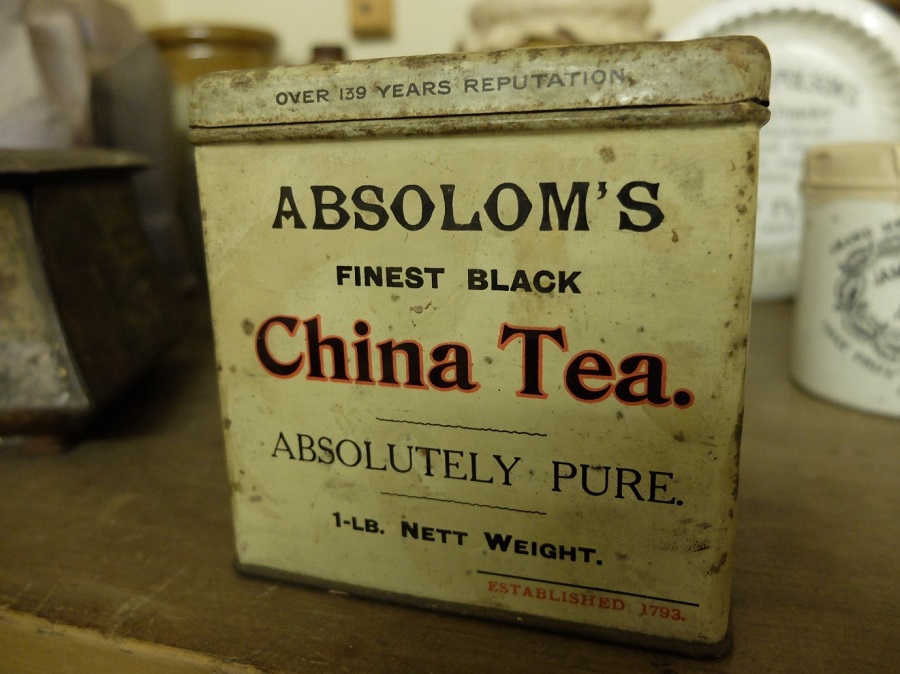 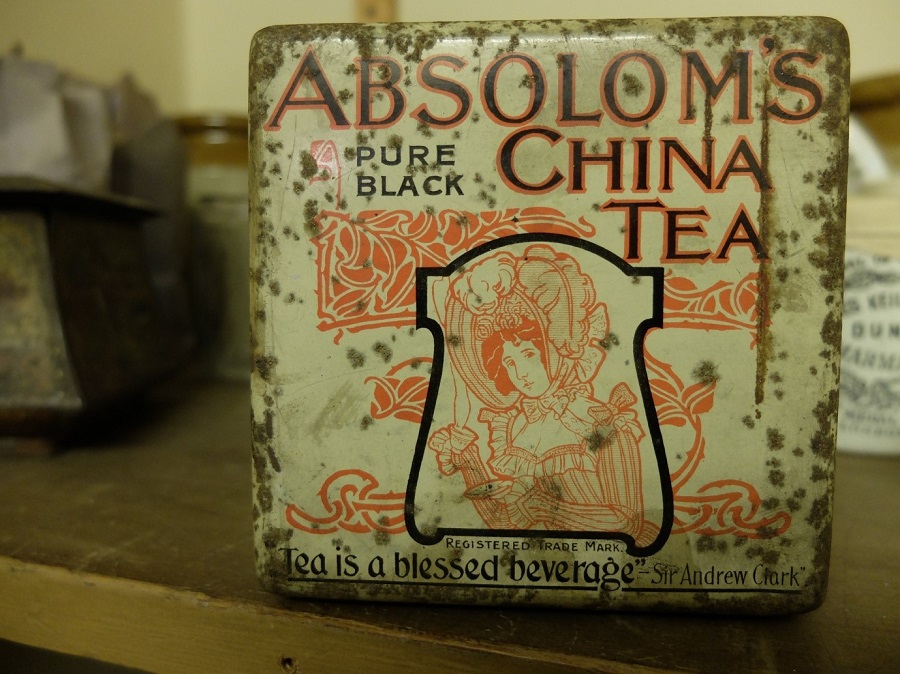 Who doesn’t love a cup of tea? We’re being encouraged back to school and offices, and the days are seeming already rather autumnal, so our teas and coffees are seeming even more important! How would we get on without them? People in Britain have been saying this for a long time.

This little tea tin, made of cheap metal, now rusty and grubby, is still a fascinating object.  It was mass produced in a factory in England in the 1930s, based on an earlier design that had been running since at least 1900. The design, with its Art Nouveau styling, and Kate Greenaway-like woman, was intended to capture the eye of shoppers and encourage purchase.  Tins like these, whether for tea or biscuits other comestibles, were highly prized in the late 19th and early 20th centuries. I confess I still treasure things like this – I keep biscuits in a couple of lovely Christmas tins I received years ago. All part of our consumerist culture, as much then as now.  People liked to show off what they were buying, ‘keeping up with the Joneses’ (the phrase probably dates from a strip cartoon created by Arthur Momand in 1913), the attitude was much to the fore.  Tins such as Absolom’s China Tea would be put in pride of place on a mantelpiece or kitchen shelf for the neighbours or the neighbour’s servants to see. A subliminal message that you were keeping up with the times and could afford the latest and best in products! True to the message, our tin is currently on show in a prominent location in the pantry at the museum.

In what seems a very contemporary touch, the tea merchants for Absolom have turned to a leading member of society for brand endorsement, no less a man than Sir Andrew Clark, one of Queen Victoria’s doctors and a physician with one of the largest practices in London.  He is used to promote the tea on three sides of the tin; which includes his portrait, signature and a long quotation.  He condemns Indian Tea, as ‘those who take it actually get into a state of tea intoxication’ – whatever that means! Have you been in a state of tea intoxication? And why on earth would you get it from Indian grown tea and not Chinese? Of course, he advises China Tea instead… He says that China tea ‘is a blessed beverage’ and it ‘will not injure and … will refresh’. This use of Clark’s words was a little naughty. He was the President of the Royal College of Physicians from 1888, and it was against College ethics to be involved in public advertising!

When searching for further information about Absolom teas I was also fascinated to see another type of advertising the company used. Company vans were used, then as now, to advertise their products, and Absolom had one that was in the shape of a giant teapot! I’d like to see those back on the road again – but I’d settle for a nice cup of tea!