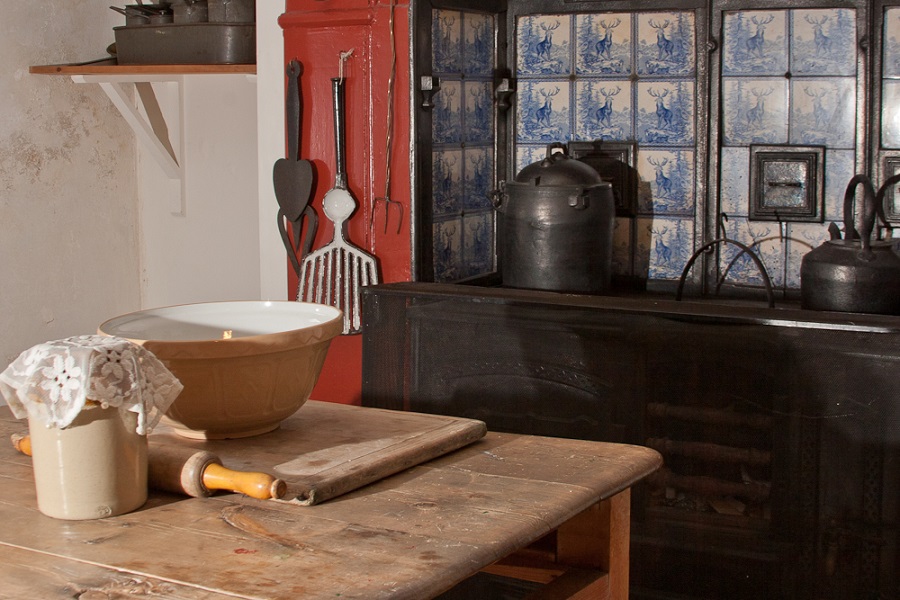 The kitchen range – by Sally, a volunteer

Black leaded and lovingly preserved, with blue tiles providing an attractive back drop, the cast iron kitchen range instantly established itself as one of my favourite objects.  Even without a fire burning, it seems to radiate a warmth and the promise of a welcome.  When the fire is actually alight, the kitchen comes alive and for our Christmas gathering of course, with mulled wine on the hob and mince pies crisping in the oven, it comes into its own.  But there are moments when it can also look unnervingly sombre, standing as a reminder of all the toil which it exacted from those who tended it so that it might serve the family residing on the upper floors.  According to contemporary sources, amongst them Mrs Beeton, the kitchen range could be the sternest of taskmasters, demanding dexterity and constant attention if it was to function at its efficient best.

In fact, the closed kitchen range was the first big technical improvement in British cookery since the open fire, although ‘technical’ might not be a word that instantly springs to mind!  For Mrs Beeton, in her Book of Household Management, the kitchen was ‘the great laboratory of the household’ and the closed fire range was at its centre.  She claims that these were first mainly used in Devonshire ‘for the convenience of the hot plate over the top for scalding milk to obtain clotted cream.’ It seems there were many styles of range but all shared an oven and a boiler to heat water and by the 1860s, they also had hot plates to simmer things on and keep them warm. Not only could it provide the household with a constant supply of hot water but it also ensured that soot no longer fell down the chimney into the food. The kitchen range with two ovens, adjustable fire box, plate rack, ventilating door and reversing damper, would have cost between £17 and £19 and no doubt was the ‘must have’ of its day.

But for all its manifold advantages, the kitchen range generated work which never appeared to let up. One of the Holst servants would have spent long hours cleaning it, an enormously intricate task.  The fire irons were removed, then damp tea leaves scattered over the fuel to keep the dust down, before the ashes and cinders were raked out.  She would then have to sift through the ashes to pick out the cinders to be re-used in the kitchen. The ‘innards’ of the range needed regular attention, which meant servants spent a great deal of time on their knees.  Black lead would be applied to the front every day, the oven swept and regularly scraped and washed with vinegar and water. Soot seeped into the flues and left a fine layer on surfaces. Victorian sensibility to its presence involved them in a constant battle to vanquish it. And although the food in the oven was safe, it might still fall into saucepans simmering on the top.  Mrs Beeton emphasises that efficiency depended on keeping the flues, through which smoke and soot pass, perfectly clean.  Soot was the enemy it seemed.

Testimony to its efficiency and to the care it receives in the Holst kitchen is the fact that as a result of our curator Laura’s expertise, the kitchen range still produces the most delicious cakes and puddings. Fortunately, it has now been transformed into a benign presence, standing as it seems to me at the very heart of the house.