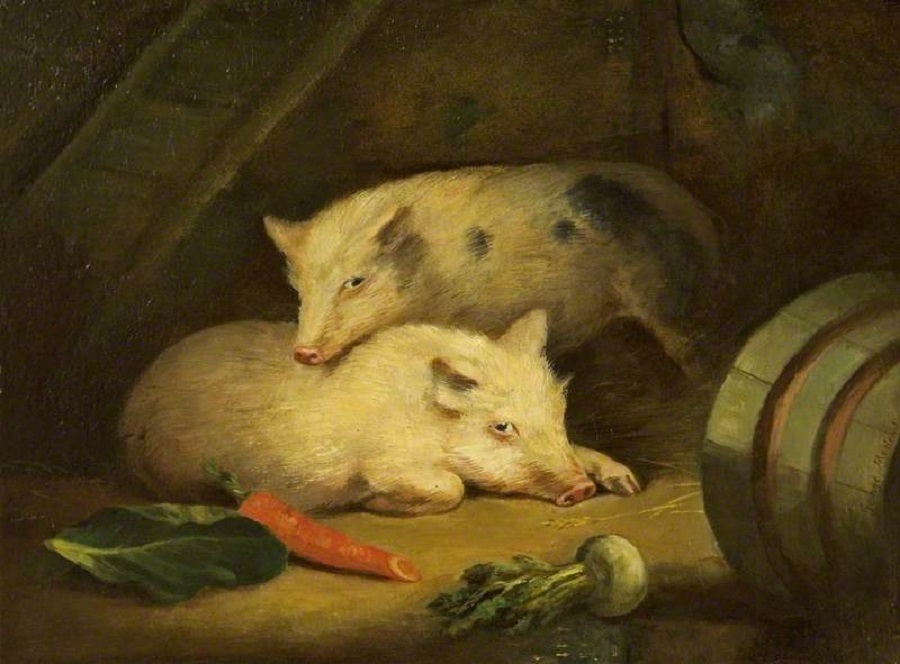 The museum holds a number of paintings from the period when the house itself was built, ranging from portraits of the Holst family, to mythological scenes, to landscapes – and these pigs!

George Morland (1763 – 1804) was an English artist who specialised in landscapes and rural scenes, including farm animals like these pigs. He displays great sensitivity to the animals he paints, capturing, I think, the personalities and vulnerabilities of these ordinary farmyard creatures. Despite getting into trouble financially and drinking heavily, he was also an abolitionist, opposed to the slave trade. He was an astonishingly prolific artist, painting one or two pictures a day – but then spending the money earned on drink and luxuries. He died in a debtor’s prison aged only 41, having painted over 4000 paintings.

Why would you want a picture of a pigsty in your town house? Although paintings like this seem much humbler than the soaring landscapes of his contemporaries Turner and Constable, and the Gothic fantasies of Theodor von Holst, there is a common sensibility – a new appreciation for the importance of nature. While von Holst explored the legendry creatures inhabiting nature, like the Undine, a water spirit, seen in another painting in the house, and artists like Turner painted dramatic mountain landscapes, capturing the awe that these landscapes invoked in people, Morland’s pigs show an appreciation of the life of the farm and the farmer. Morland painted these ‘picturesque’ scenes of rural animals and their owners knowing they would sell, but as he fully understood what it was like to be poor, there is perhaps a bit more sympathy in his poor farmers and their lives.

As a rule, I don’t particularly like Morland’s work – his life is more interesting! – but there is something very winsome about these two pigs. They are quite different from the earlier naïve depictions of prize-winning pigs, which were designed to show how plump and impressive the animal was before going to market. These pigs, however, you can imagine being reared in the house and being made pets of!