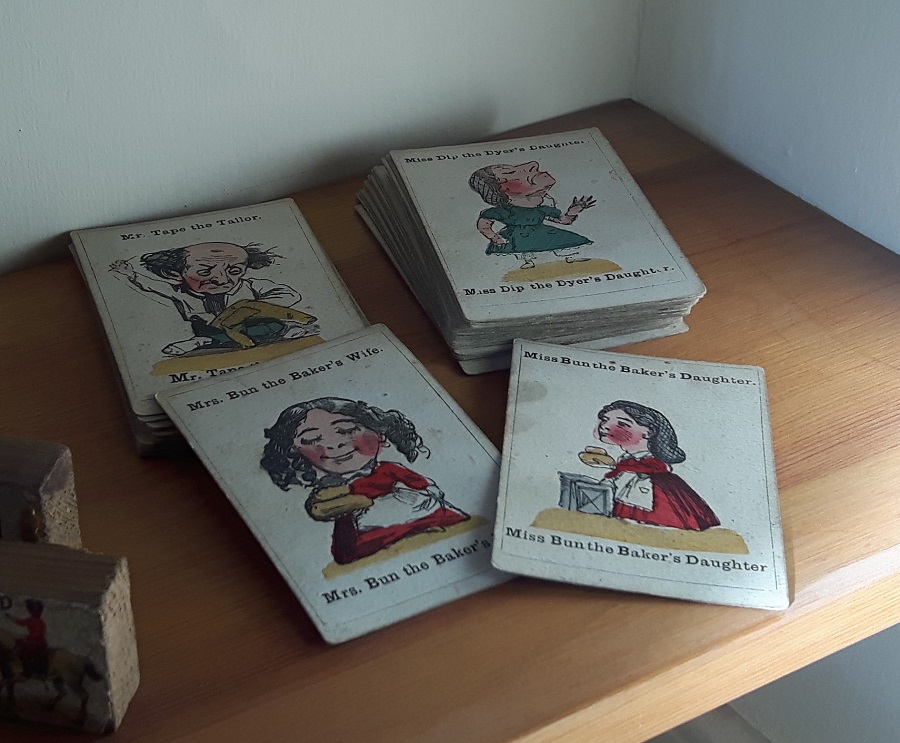 These playing cards can be found in the nursery at the Museum, and are one of several card games that a Victorian child could have played with. We’ll look at more of them over the coming weeks.

These cards were originally produced in 1851 by games manufacturer John Jacques & Son Ltd. of London. If the illustrations look a little familiar, it’s because we know another set of illustrations by the artist quite well. He was John Tenniel, at that point the chief cartoonist for the magazine Punch, but best known for his illustrations to Lewis Carroll’s Alice in Wonderland.  In 1851 Happy Families was a new game, and the cards were actually shown at the 1851 Great Exhibition and were an instant success! The cards are lithographs, and have been hand-coloured – quite crudely, the colour not necessarily within the line. I suspect that the children who played with them probably weren’t that bothered!

The idea of the game is simple. You have to collect the sets, and the person who ends up with the most sets wins. In this case, the sets are families, a father and mother with boy and girl children. The names are designed to make children laugh – Mr Bun the Baker, Mrs Chip the Carpenter’s Wife, Master Soot the Sweep’s Son, Miss Bones the Butcher’s Daughter and so on.  Tenniel’s illustrations are caricatures. While in the photo here you can see that Mrs and Miss Bun look nice and friendly, Miss Dip the Dyer’s Daughter is snooty, with her nose in the air, and Mr Tape the Tailor looks rather harassed! It was one of the first card games intended to actually amuse children, rather than simply educate them.

It remained popular up to and beyond the Second World War, and lots of companies copied the formula with names like Merry or Funny Families. The originals of the game only barely survived the war, however, as the factory was destroyed – but the pattern book for the card games was in a safe that fell from the top floor to the basement still intact! One original illustration remained: Master Potts the Painter’s Son. The original printing plates were also later found.

I remember playing Happy Families – alongside Snap!, which the company also introduced to Britain – as a little girl. It wasn’t quite as raucous as Snap!, but I loved the little families. My set had sweeter illustrations than the Tenniel ones, but I think I would have loved these funnier ones if I’d had them! It was highly competitive, though, trying to work out what the other players had so you could strip their sets from them with careful questioning! Perhaps a game to try right now in lockdown?