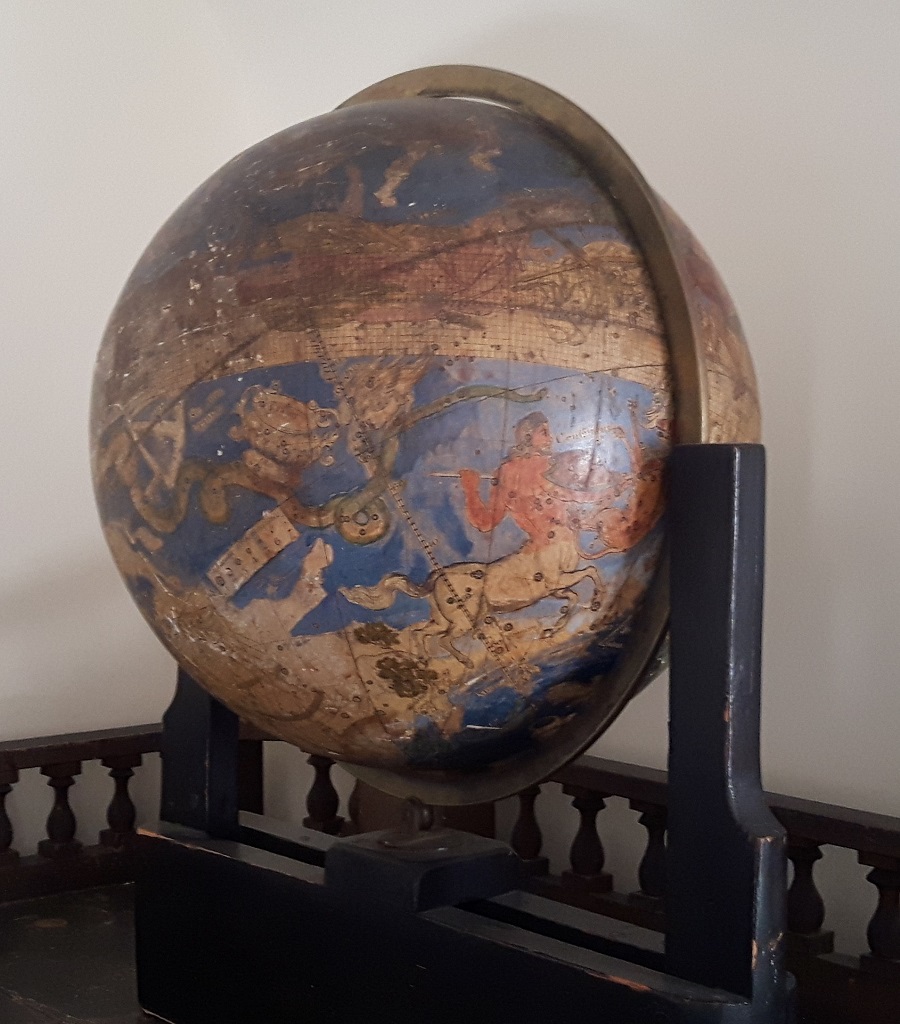 Globes showing the night sky were first developed in the Greek and Roman world, but new stars were added as Europeans travelled more of the world in the 16th century and saw more of the southern hemisphere’s constellations. By the 19th century they were often found in nurseries as teaching aids for children to help them learn the position of the stars, their names and the Greek myths.

This week has marked the last supermoon of the year – the Flower Moon. I wonder how many of you have been moongazing. Our skies might be a little clearer now – so long as it’s not cloudy! – during lockdown, so watching the stars might be more of a possibility. But what if you don’t know the constellations? Today you might use an app, but in Victorian times you certainly couldn’t. One way of getting to know the constellations and the mythological stories behind them was to use a globe like this, a celestial globe.

The constellations you can see most clearly in the image are Centaurus and Lupus, a centaur and a wolf battling each other. This constellation was named by the ancient Greeks, but had been known for a long time. In ancient Sumer it was known as Bison Man – a reminder that the European Bison once roamed wild in the Middle East and Europe. Centaurus contains the nearest star system to our own, Alpha Centauri, whose star is the third brightest in the night sky.

Next to the Centaur is a strange looking serpent coiling around what looks like a large cup – this is the Hydra, which you might know as a many-headed monster killed by the hero Hercules. This is a different hydra. Once, Apollo asked a crow to fetch him water, but the crow found a fig tree – but the figs weren’t quite ripe. So, the crow waited a few days and then ate the figs when they ripened. Only then did he remember his task. In a panic he plucked up a water snake in his beak, flew back and flung it down before Apollo, blaming the snake for blocking him getting to the spring.  Apollo saw straight through this! He flung crow, snake and cup into the sky and made them stars. He then cursed all crows to eternal thirst, which may be why the crow has such a croaky voice.

These two constellations are best seen in the UK during the spring – are they still in the night sky now? Why don’t you have a look and see?

I would have loved something like this. I’m not very good at the constellations, although I do know a lot of the mythological stories behind them. I know Orion, the Great Bear, Ursa Major, the Pleiades, Cassiopeia – but not much more! I’ve only ever really used a telescope back in 1997 when the comet Hale-Bopp came close to earth. Today of course there are apps to help us identify the stars and constellations. I nipped onto my phone’s app store to have a look, and there are lots of different ones. But I remember poring over atlases and my tiny globe as a child, and would have loved this one with its creatures and figures from stories.